The Law of the Spirit 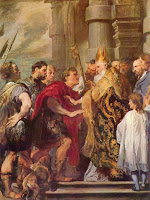 On November twenty-fourth, 380 A.D., Theodosius the Great (Emperor of Rome) made his adventus into Constantinople, which had fallen under Gothic occupation. He thus reunited eastern and western portions of Rome, connecting Europe and Asia differently than the architectural bravery of the modern Bosporus Bridge. It was he who made Christianity the state religion. Theodosius was the true successor of Constantine (who had convoked the First Council of Nicaea, out from which came the Nicene Creed). Two days following his advent in Constantinople, Theodosius expelled the anti-Nicene bishop and installed one who held, as he did, to the Nicene Creed. A few months later, Theodosius and Gratian (his co-augustus) commanded all of their people (encompassing eastern and western Rome) to profess the same Nicene faith held by the bishops of Rome and Alexandria.

Much in the way the Law of Moses served to unite Israel as one nation, under God, the Nicene Creed has helped unify the hearts of believers throughout Christian history. It's value is inestimable. But at the same time, we must not forget that Christianity is not about a creed...it is about a Person. When members of Christ's Body elevate one set of doctrines over the whole Person of Christ, it is like this, as Paul said: "if the whole body were an eye, where would the hearing be" (1 Corinthians 12:17)? "By one Spirit," says Paul, "we are all baptized into one body" (vs. 13).

There are more than six hundred laws in the Pentateuch, and many sects have probably grown up around each and every one of them. But by the time we get to Micah 6:8, these laws are apparently simplified into three: “And what does the Lord require of you but to do justice, to love kindness, and to walk humbly with your God?” In the New Covenant we come to the simplest of all—Christ! God’s will is to “gather together in one all things in Christ, both which are in heaven, and which are on earth; even in Him” (Ephesians 1:10). Certainly this is why Paul preached Christ alone to the carnal, separatist Corinthians! Some said they were of Paul, others of Apollos. But Christ alone is All in all. He cannot be limited to a preacher or even a denomination, and certainly not to a narrow creed or a sectarian doctrine. Christ is vast and unsearchable.

The just man, according to the most influential philosophers, ordered his life by an external code, but the Bible tells us the just shall live by faith (Galatians 3:11). Jesus and the Apostles delivered this gospel of grace to a world steeped in Hellenism. The Greeks had almost as many opposing schools of thought and varying philosophers as we have denominations. What's more, Aristotle’s ideal man was one who would never receive, but always give...utterly independent. Christ humbles us by serving us. As Bonhoeffer says, His act of charity toward us is the ultimate shame; that we should be in the position of poor beggars wounds our pride. Many people refuse the Apostle’s answer as to what sort of law the just live by: the Law of Faith (Romans 3:27). Faith strips mankind of all boasting. It takes away the Adamic “fig leaves” one likes to don.

And faith is the only way we can be whole. The only way to keep the Law as perfectly as it requires, to keep the entire Law, is to walk by faith—abide in Christ. He is the embodiment of the whole Law. He is the final Word (Hebrews 1:1). To be perfect as He is perfect is to abide in Him…to take Him for your perfection. It has come down to one thing: “Believe in Him whom He has sent” (John 6:29). All else follows as a natural progression. When you believe and abide in Him, the result is that you love God and your neighbor…from within. Faith is the ethic of the believer.

To walk in the Light as He is in the Light is to walk in separation from darkness. He is Light and there is no shadow in Him. To walk in the Light is to live by the Law of the Spirit. The Law of Moses is, of course, a shadow of Christ. It serves as a compass, a guide...a lamp to our feet. But Christ Himself is the Destination. And only as we walk in Absolute Light (1 John 1:7) does the blood of Jesus cleanse us from all sin. Light automatically separates us from darkness, if we will but step into Him…believe. The continued walk of faith—abiding in the Light—is the purpose of Christian education. The flaming sword sunders soul from spirit, truth from error, sin from sinners; Light eradicates darkness.

Much like the built-in laws of nature, the Law of the Spirit empowers believers to live a fruitful Christian life in the same way a branch produces fruit when it is connected to the vine (John 15:5). The law of Life in Christ is organic, rather than mechanical. “A Jew,” says the Apostle Paul, “is not one outwardly, but inwardly” (Romans 2:28-29).
Posted by Paul at 2:55 AM