Christ is the exact substance of every inkling of myth and ethic—of every shadow—that ever hinted at Him and guessed at His existence. The Apostle Paul proclaimed “the Lord of heaven” as the “unknown god” whom the Athenians ignorantly worshiped (Acts 17). He noted that they were religious (superstitious) people. Among them were Epicureans and Stoics, two groups who were boldly opposed to one another. 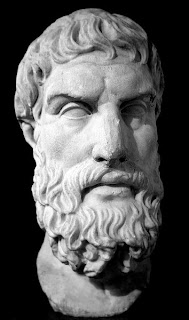 Epicureans were those who held to the creed of Epicurus, who scoffed at what he called superstition though he was deeply irrational himself. He thought the world was not created by God, but that it “came into its being and form, through a fortuitous concourse of atoms, of various sizes and magnitude, which met, and jumbled, and cemented together, and so formed the world.” Sound familiar? The highest pleasure to Epicurus was tranquility and freedom from fear. One could achieve this pleasure through knowledge, virtue, temperance and friendship.

There are two major sects in the school of Epicureanism. The rigid sort found happiness in the mind as they practiced moral virtues. The so-called “remiss” or “loose” Epicureans found pleasure in the body as sensual beings.

At the Stoa Poikile (the painted porch) a man named Zeno taught his ideals. From this porch in Athens came the Stoic philosophy. Zeno rightly taught that there was one God and that He made the world. However, he made a quick departure from what was right when he taught that the law of morality was the same as the law of nature. To him good, for man, was instinctual; and love for all other beings was one of his prime ethics. Indeed, Adam and Eve were “good” as a part of God’s good creation, but they sold themselves into the dominion of darkness, and sin became as natural as breathing to their race.

How love can simultaneously be seen as instinctual, yet also as a tenet that must be obeyed, is beyond sound reason. Bird dogs hunt birds not according to creeds, but to instinct. If they had to be told or taught to hunt birds, it would not be instinctual. Nevertheless, to the Stoic, an unkind person is only someone who is unaware of the inherent kindness within him. The logos (the inherent, universal reason in all things) is something one can forget. Any divergence from the virtues is the failure to remember the logos within. It would be like one’s heart forgetting to pump.


Of course, if the tenet is to choose between two opposing natures (as the New Testament teaches), the Stoic belief makes perfect sense. The man who walks in the flesh (the old nature) naturally commits acts of sin. The man who walks in the Spirit (the new nature) naturally commits acts of righteousness. If one cannot “forget” to abide in the Vine, one can certainly be neglectful of accessing His grace. Therefore, like the Stoic who forgets his instinctual “good,” the Christian can forget that his goodness is nothing apart from God (Psalm 16:2).

The point here is that each of these philosophies contains scraps of truth, but not Truth Himself, who, in reality, is Wisdom. Twila Paris has written a song called Wisdom, which accurately portrays people such as the Epicureans and Stoics. She sings, “I see a multitude of people, some far away, and some close by. They weave together new religion. From tiny remnants they have found a bit of truth, a greater lie.”

As leaves will die when picked from a tree, so the fig leaves that covered Adam and Eve were dead. They were disconnected from their source of life like the man and woman they covered. They were fragments—like shards from a broken vessel. God necessarily clothed the man and woman with His righteousness, because their self-righteous covering was inadequate.

A bit of truth taken from Truth Himself is like taking a branch off a tree. It has not ceased to be true, per se. It has, however, ceased to be living. Of course, most of philosophy is built around disjointed truth—having lies built into it like tares sown into a field of wheat.

One can collect an armload of “branches”...a bunch of truths...and organize them into what one might call his creed, code of ethics, or even his doctrines. The detachment from life does not make the branch cease to be a real branch. One’s creed may have come from Christ, but if he is not abiding in Christ—alive and nourished by the Vine—his religion is no more useful in eternal terms than any other philosophy.

If one severs an arm from the body, it does not cease to be an arm; it merely ceases to be alive. When truth is independent of God, it does not cease to be true. It ceases to live. Worldly religion is like Dr. Frankenstein’s invention; when one takes parts from their proper place and patches them into his own hierarchy of values, prioritizing them according to his subjective understanding, he ends up with a sort of monster. Secular education is like this.

The issue is not ultimately whether a person’s ethics are right or wrong, good or evil. Ethics merely result from the realm one abides in: Darkness or Light. The issue is between Life and Death. “I have set before you life and death,” says God, “choose life” (Deuteronomy 30:19). There is nothing wrong with ethics or ethnicities, per se. However, the central issue remains Life. We can only rightly discern between the clean and the unclean, the holy and the profane, according to His Light.

Welcome to ChristianSchools.com ! Search or navigate through this site to find Christian Schools including Christian kindergartens, preschools, elementary, middle and high schools.

With more than 30,000 christian schools in the United States alone, christianschools.com intends to be the leader to help you find a christian school for your children located in your local area.

If you are an administrator of a Christian school, please provide updates, and claim your listing so you will be the only person authorized to provide updates and / or announcements about your Christian academy.