Two Plus Two Equals Five. Or At Least They Think So. 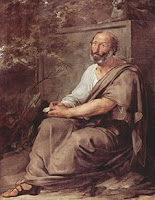 d man is body and soul, and he was right, but not altogether right. He was missing one major part of the person—the spirit. A missing part, after all, can be a big deal. The person with ears and nose, but no eyes, is hardly the person one wants to drive him on his next outing. The blind person may be good at a great many things, but the loss of sight is an impairment. Physical wholeness is taken for granted by so many of us. Yet, wholeness in education is too-often overlooked. It is as if philosophical blindness is just what we have come to expect at schools; we accept it as the norm. Worse, we often don’t even notice the blindness...as if we are blind ourselves. Secular education is misguided because of its incompleteness: it has gone askew because it is blind.

G.K. Chesterton noted, “Falsehood is never so false as when it is very nearly true.” Two plus two isn’t actually five, but it is close. The danger in Godless education is not that the secularists teach algebra and astronomy; it is that their overarching philosophy—godlessness—is a kind of defiling thing. It is a blend of fact and fiction, myth and reality. A false equation only has to be missing the tiniest detail to be wrong, but secularism misses the biggest part. Replace manure for chocolate in a batch of brownies and see how edible they are. The one foul ingredient defiles all the rest. It is like committing adultery with a prostitute while declaring fidelity to one’s wife; Light and darkness are incompatible.

Secular education cannot include God, because belief in Him would contradict its teachings. Thus, the truth is suppressed in unrighteousness. God is subtracted from the equation and replaced with the ideology of humanism. Christian education, on the other hand, can include subjects like science and astronomy, because these teachings do not contradict the existence of God.
Posted by Paul at 3:50 PM