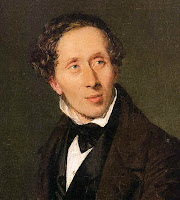 “‘Now I know what life is!’ beamed the artist. ‘It is love! It is being lifted above yourself, the rapture of losing yourself in beauty. What my friends call life and pleasure is unreal and as fleeting as a bubble; they know nothing of the pure, heavenly altar wine that initiates us into life!’” — Hans Christian Andersen

Jesus said “he who eats Me, he also will live because of Me” (John 6:57). In the Hebrew temple, the "bread of the presence" was literally the “bread of the face.” This “showbread,” as it was called, was commanded to be unleavened.

Classical education attempts to impart character by showing students the artful beauty in paintings, statues, and the prose and poetry of Greek and Latin. The idea is that once the student acquires an appreciation of art, his or her ethics will reflect a similar beauty in the way daily life is gone about. The Greek pursuit of beauty was, at best, misguided. Being ignorant of the “leaven” (original sin) that resides in every individual heart, their appreciation of “forms” turned into lust and licentiousness. With defiled understandings, they constructed their own meaning around things, misunderstanding and misusing the beautiful stuff of creation.

While we are full of leaven, Christ is not. When Moses asked to see God’s glory, He showed Him His unsullied attributes. And it is because all have sinned, and fall short of the glory, that we must be saved—restored to the image of God’s beautiful and "unleavened" likeness. God’s absolutes are not merely commands—they are the very essence of His being. And we are called to be like Him. Sinning is in large part wrong doing, but falling short of the glory is wrong being…wrong doing is a result of wrong being. Our “doing” should come out of our “being,” and our “being” should be in Him.

Christ-centered education is the opposite of secular education; it is not about self-realization. “For you have died and your life is hidden with Christ in God” (Colossians 3:3). Socrates said, “One thing I know, and that is that I know nothing.” Secular academia has latched on to this notion, which seems like a humble statement at first glance. But upon closer inspection we find that Socrates was planting the seeds of finite relativism[1]—all is a matter of the way the individual sees things. “Know thyself” was Socrates’ greatest revelation. Contrast this with Jesus’ teaching to deny thyself, and the wisdom of Solomon to “lean not upon your own understanding.”

Indeed, everything is relative. But what or who is everything relative to?