An important principle to grasp is found in 1 Corinthians 2:14, “But a natural man does not accept the things of the Spirit of God; for they are foolishness to him, and he cannot understand them, because they are spiritually appraised.” Greek scholar and commentator, Kenneth Wuest, says:

“The word ‘natural’ is the translation of a Greek word which Paul uses to describe to the Corinthian Greeks the unregenerate man at his best, the man whom Greek philosophy commended, the man actuated by the higher thoughts and aims of the natural life. The word used here is not the Greek word which speaks of the sensual man. It is the word coined by Aristotle to distinguish the pleasures of the soul, such as ambition and the desire for knowledge, from those of the body. The natural man spoken of is the educated man at the height of his intellectual powers, but devoid of the Spirit of God.”

Aristotle’s “natural” man was the zenith of humanity, yet he was as an ignoramus in comparison to the spiritual man. God is Spirit. His habitat is spiritual—heavenly; His words are Spirit. To the religious relativists of His day, Jesus said, “Where I am, you cannot come.” He was speaking to them as to mere, natural men. In another place, He prays to the Father for His disciples that they “…be with Me where I am.” Jesus dwelt in two realms at once—heaven and earth.

The unbelieving secularists claim to be objective because they believe in science. To them, anything they can’t perceive is non-existent, like God. It has been said that the man with an experience is not at the mercy of a man with an argument. The secularist will undoubtedly say that it is all a matter of emotion; that God exists in one’s feelings and imagination.

My disenchanted friend claims to believe scripture, albeit, he reasons away the idea of spiritual life by saying "spirit" is a metaphor for one’s soul. He insists that Christians do not experience the reality of Go 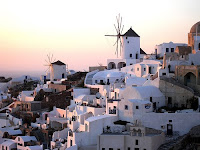 The relativist says it is all in the imagination, but the man who has never been to the Isle of Chios should not tell the man who has been there that it doesn’t exist. One can merely show it to another on the map, but unless a man goes for himself, he merely trusts the word of the one who has been there, that it is there, and that it is as described. The poor, unbelieving relativist will never know spiritual life unless he acquires eyes to see and ears to hear! Having never left Wisconsin, he demands that the crystal-blue waters of the Aegean are a farce; Chios is a fanciful myth to him. He is utterly content with his small world.

As "theological scientists," Christians do not merely theorize about what they believe. The Apostles, like true scientists, proclaimed what they had seen and heard (I John 1:3). Believers know they are the children of God because they perceive Him: “The Spirit Himself testifies with our spirit that we are children of God” (Romans 8:16).
Posted by Paul at 6:57 PM