rificed to their myths with an instinctual sense of unworthiness. They wanted to obtain their desires, but felt undeserving to obtain them apart from oblation. As we go further down the road of degeneration from mere feelings of guilt, there is a mode of being, which is seen in the one who stands up and says, “I am worthy.” This one sacrifices—perhaps like Cain—out of insane pride, as if he has something to give the gods, which the gods did not first of all give to him.

This is very similar to Aristotle’s idea of the ideal man—completely self-reliant. In his world, the gods—if they exist at all—are like helpless women on welfare, and he is magnanimously generous in showing them pity. This low estate is the habitat of the agnostic relativist. That he even gives God recognition enough to dismiss Him is freely giving homage, in his way of seeing things. Naturally, this is mostly (if not completely) subconscious.

The average pagan has, at least, a healthy sense of guilt. He panders to the gods because he is confused and confounded. In the Malayan jungles, where my Aunt and Uncle were first missionaries, the natives (known as the Sakai) cut themselves to appease the gods whenever they heard thunder. If the thunder did not stop soon enough, they would sacrifice one of their own. Whether or not the Sakai were glad to believe such senselessness one can’t know. One can say, however, that they were very glad to hear the truth of the gospel. But the relativist, strangely, is not. It is as if he lives in the darkness because he likes it…because he has, deep down, chosen it. Like cockroaches fleeing light, relativists run from reality.

In his book, The Everlasting Man, G.K. Chesterton says the philosophers, if anything, were rivals to the priests. The philosopher who claims to be enlightened has abandoned the search for truth upon his arrival—his conclusion—of atheism. There is the wondering seeker, wandering and searching for truth; and there is the static dogmatist, having arrived at his own, concocted destination. Since this one’s thoughts originate with him, they end with him; he is the alpha and omega of his own delusion.

While our American society was mainly built upon the solid foundations of scripture, the unhinged ideals of Homer and Plato (pagan Greek thinkers) have crept in to masquerade as “reason” and “enlightenment.” Along with The Republic, Homer’s The Iliad is seen as the cornerstone o 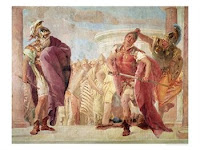 f Western Culture. When it comes down to it, The Iliad is essentially about obtaining one's desire through sacrificing to the gods: self-seeking. The Republic teaches people to question and doubt absolutes through the deductive reasoning of Socrates. The “religious” ideas put forth in The Iliad combined with the “secular” ideas of The Republic serve as foundational elements in both pagan religion and pagan philosophy. This is not to say Homer and Plato have nothing good to convey. It's just that their good is too intertwined with evil to swallow the pill whole. When reading their works one must exercise discernment between right and wrong, holy and profane.

That Plato should blaspheme the mythical gods of ancient Greece is understandable. One should not live in superstitious fear of displeasing Athena, or any other mythical being. Nonetheless, the obvious fact that Athena was make-believe should not cancel out the reality of God any more than plastic flowers or faux fur nullify the genuine articles they seek to copy. Illegitimate articles do not abrogate legitimate ones.

The pagan reasoning of Plato, allied with the superstition and selfish gain of Homeric religion, is a deadly combination. In reality, these ideals have always been combined. They are two aspects of the same, forbidden tree. They are at once sectarian and the same.

Our society is being eaten by pagan religion and pagan philosophy. Schools and Governments alike have drunk the poison of humanism. Institutions of higher learning are among the most infected with the venom of unbelief. Islam, of all things, is growing at an astounding rate. Buddhism, despite its many contradictions, continues to expand. Christian education is now more important than ever!
Posted by Paul at 7:26 PM